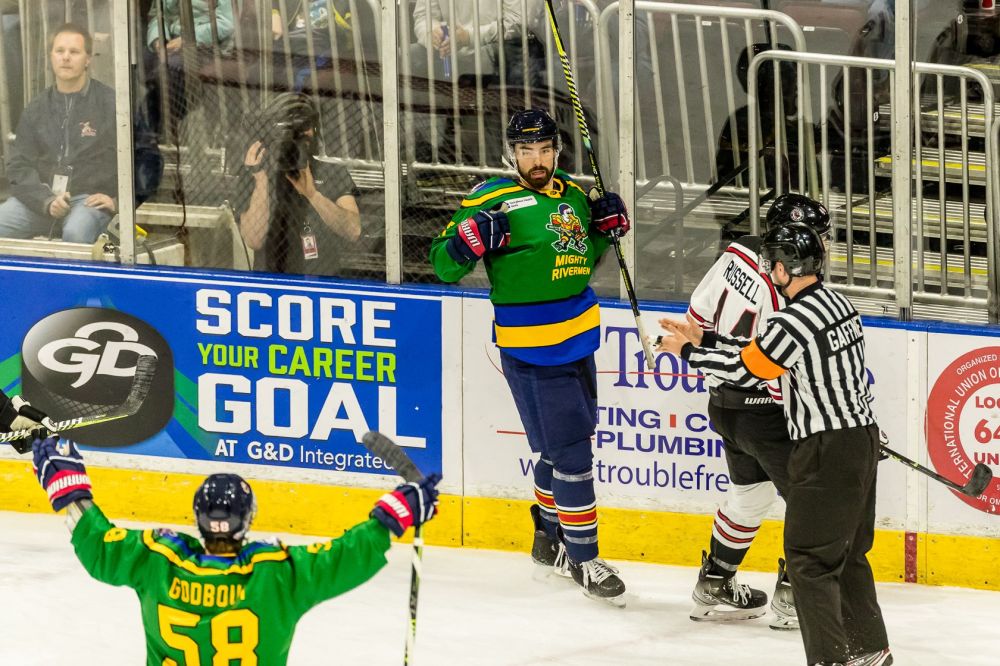 PEORIA, IL –  Mitch McPherson was described at the beginning of the season as a “robot warrior” by his coach Jean-Guy Trudel, a player that would do anything you asked him to. While no one perhaps asked him to score three goals on Saturday night, McPherson had a banner day with three goals to lift the Peoria Rivermen over the Huntsville Havoc 5-3 at Carver Arena and into first place in the SPHL standings.

Unlike last night, the Rivermen failed to pick up the first goal as the Havoc were able to take a 1-0 lead in the first five minutes. But the Rivermen were able to respond on their first power play as Mitch McPherson skated to the right circle and unleashed a quick wrist-shot that deflected off of the crossbar and into the back of the net. The goal marked the sixth of the season for McPherson.

Tied 1-1 going into the second period the Rivermen had a plethora of chances before finding the go-ahead goal on the power play as Jordan Ernst rifled a slapshot from the high slot to notch his 4th goal in four games. At the close of the period, Peoria drew back-to-back power plays that carried over to the third and resulted in a five-on-three advantage for the Rivermen to start the final frame.

The Rivermen power play continued to be lethal as Mitch McPherson cashed in for his second of the night on a net-mouth scramble to put the Rivermen up 3-1. Peoria extends their lead to 4-1 after a point shot by Brendan St-Louis found its way into the back of the net from the left point. Huntsville answered back with two quick goals to pull within one late in the third period, but McPherson capped off the night with his third goal on the empty net to secure the Rivermen’s first hat-trick of the season and a 5-3 victory and weekend sweep.

With the victory, Peoria is now 9-0-1 in their last ten games and has taken sole possession of first place in the SPHL standings. They will face off against the rival Quad City Storm for the first of two games on Thursday morning at 10:30 am for the annual Rivermen Education Game at Carver Arena.