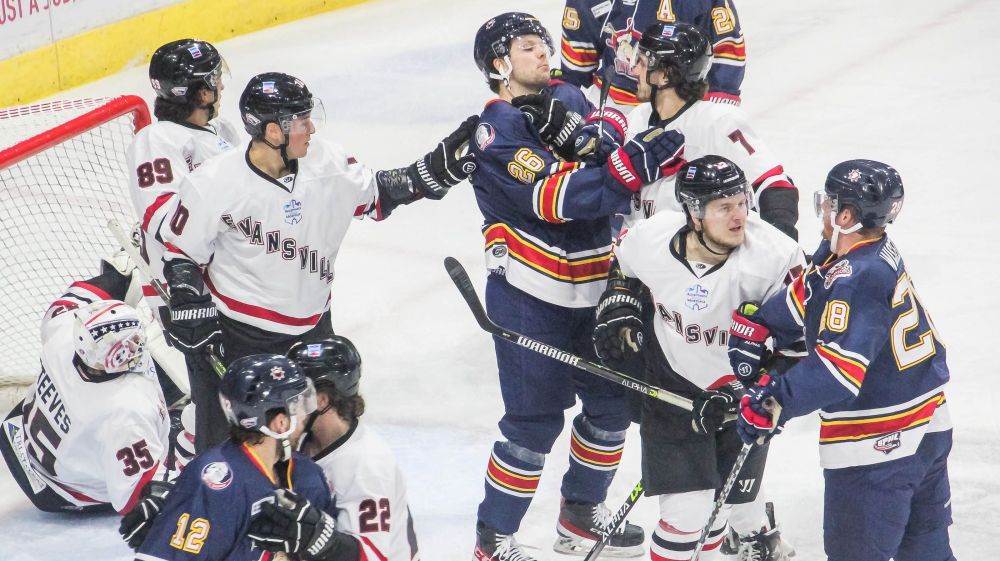 EVANSVILLE, IN –  It was a direct mirror opposite of Friday night’s contest. A large home crowd, some timely goals on rushes, and a 5-1 victory for the home team. Unfortunately, the Rivermen fell 5-1 to the Evansville Thunderbolts on Saturday night at the Ford Center. Their loss marked the first in regulation for the Rivermen in 56 days and ended a 14-game point streak.

The first minute saw the Thunderbolts on a ferocious attack. This offensive push resulted in a penalty shot just 19 seconds into the game. Although Rivermen netminder Ben Churchfield saved the attempt, Evansville got on the board less than 20 seconds later off of a point shot from the right side. The Rivermen had a few good chances to tie the game, including a wrap-around attempt by Ben Assad that was only saved by an Evansville defenseman on the goal line. In the final minute of the period, the Thunderbolts took a penalty for delay-of-game that put Peoria on the power play going into the second period.

Tyler Barrow was able to get Peoria on the board in the mid-stages of the third period as he skated to the right side after forcing a turnover with time and space at the face-off circle. Barrow, the leading rookie goal scorer, rifled a shot into the top-right corner to record his 25th point of the season. Barrow’s goal gave the Rivermen some life, but the Thunderbolts were able to counter with more two goals of their own to snap Peoria’s 14-game point streak with a 5-1 victory over the Rivermen.

Though the loss stings, the Rivermen remain in first place by virtue of the tie-breaker with Roanoke. Peoria will be back on home ice on Friday, January 6 against the Vermilion County Bobcats for the start of a three-in-three weekend against Vermilion County and Evansville. Face-off for Friday’s home game is set for 7:15 pm at Carver Arena.