Rivermen Break Away from Evansville 5-1 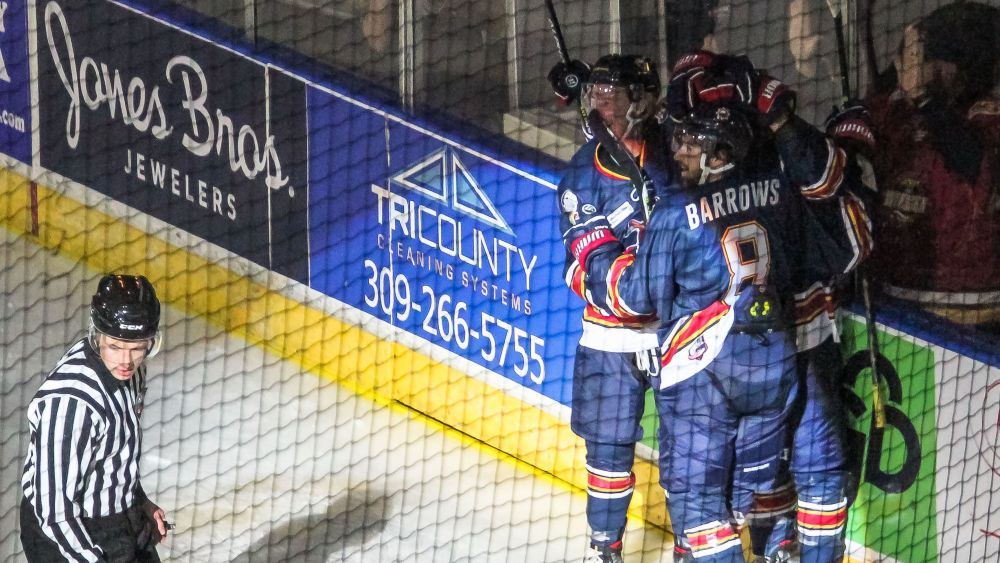 PEORIA, IL –  In front of 4225 fans at Carver Arena the Rivermen put on an exciting show of breakaways, big saves, and a lot of goals as the Rivermen broke away from the Thunderbolts 5-1 on Friday night.

It was a back-and-forth first period with both the Rivermen and the Thunderbolts getting solid chances in the period and both goaltenders making stellar saves. But it was the Rivermen who struck first late in the frame. Zach Wilkie, positioned in the deep slot, fired a hard wrist shot toward the net and as Alec Hagaman streaked across the crease, he deflected the Wilkie shot in past Evansville netminder Zane Steeves and into the back of the net. Hagaman’s 8th goal of the season put the Rivermen up 1-0.

Though the Thunderbolts were able to tie the contest up 1-1 on an early power-play tally in the second period, the Rivermen responded quickly. It started on the penalty kill as Joseph Drapluk was able to deflect a puck out to center ice and chased it down. On a short-handed breakaway, Drapluk pulled off a nice fore-hand, back-hand deke and stuffed the puck in between the legs of Steeves to put the Rivermen back in front 2-1. But Peoria wasn’t done yet as again they capitalized on the fast break. After a failed keep-in by the Thunderbolts, the puck slid out to center ice and again was chased down, this time by Andrew Durham. Durham streaked right up the ice on the break-away and fired the puck into the back of the net off a quick shot to extend the Rivermen lead to 3-1.

It was again a Rivermen goal on a break-away that put the game in hand for the Rivermen as Marcel Godbout took a lead pass from Tyler Barrow in stride and stepped in over the Evansville line all alone. Taking a page from Durham’s playbook, Godbout rifled a quick-shot glove side into the back of the net. Peoria added an empty net goal in the final seconds to end the game with a 5-1 victory.

The win puts the Rivermen back in first place in the SPHL as they look to end the 2022 calendar year on a high note on the road in Evansville on Saturday night, face-off is set for 7:00 pm.