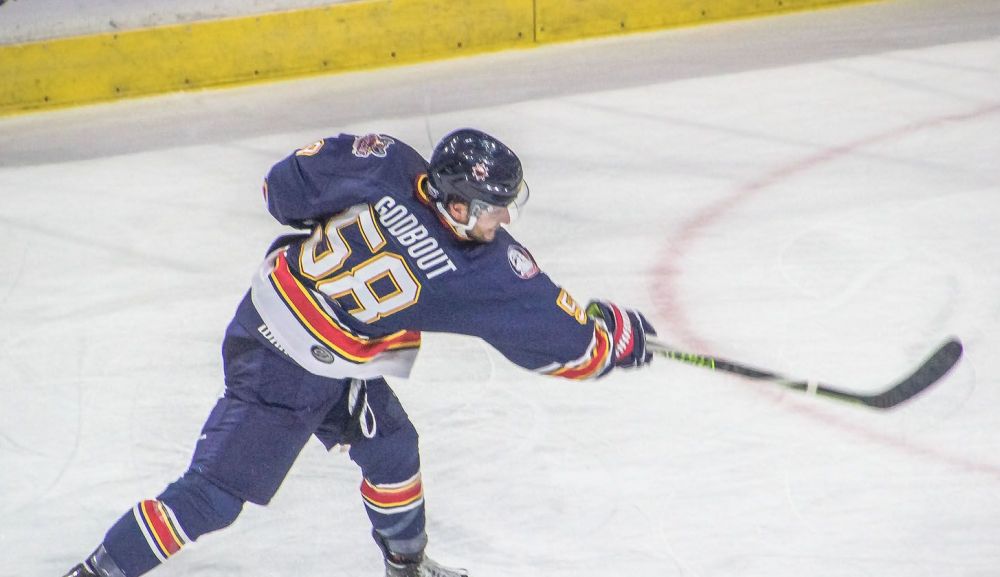 DANVILLE, IL –  In their final game before the holidays the Rivermen brought some Christmas cheer and plenty of offense to the fans in Danville as Peoria defeated the Vermilion County Bobcats 5-2 on Sunday afternoon.

Peoria was able to get on the board first as Alec Baer curled with the puck at the top of the left-wing circle and sent a shot on net that was able to beat Vermilion County goaltender Brett Epp between the legs. Baer’s 13th goal of the year put the Rivermen up 1-0, though the lead lasted only five minutes as the Cats were able to tie the game off of a quick shot from the left side. Peoria killed off three penalties to close out the first period tied 1-1.

The second period saw the Rivermen send three times the amount of shots on net as the Bobcats. Andrew Durham was able to capitalize on a wrap-around attempt to score his first goal in a Rivermen uniform, but not before the Bobcats tied the game yet again, this time on a back-door pass play. The Rivermen would be forced to wait until the mid-way point of the game for their next goal as Tyler Barrow saw a shot by Baer from the left side get saved by Epp. But the shot produced a rebound to the right of the net and Barrow made no mistake as he deposited the puck to record his 10th goal of the season. Barrow’s goal gave the Rivermen a 3-2, and it was a lead they held through the remainder of the second period thanks in part to some crucial saves by Peoria goaltender Eric Levine in the waning seconds of the period.

Less than a minute into the third period, Joseph Drapluk sent a quick back-hander to the net and into the top shelf to give the Rivermen a bit of breathing room and a 4-2 lead. Alec Hagaman added on a power-play goal late as he cut across the goal-mouth to score Peoria’s 5th goal of the game. It marked the fifth time in six games that the Rivermen had scored five goals or more.

In the end, Peoria secured the 5-2 victory on the road to mark their 11th victory in 13 games. The Rivermen, in firm possession of first place in the SPHL standings, will be off for the holiday break before heading back to Carver Arena for a home-and-home series against the Evansville Thunderbolts starting on December 30.