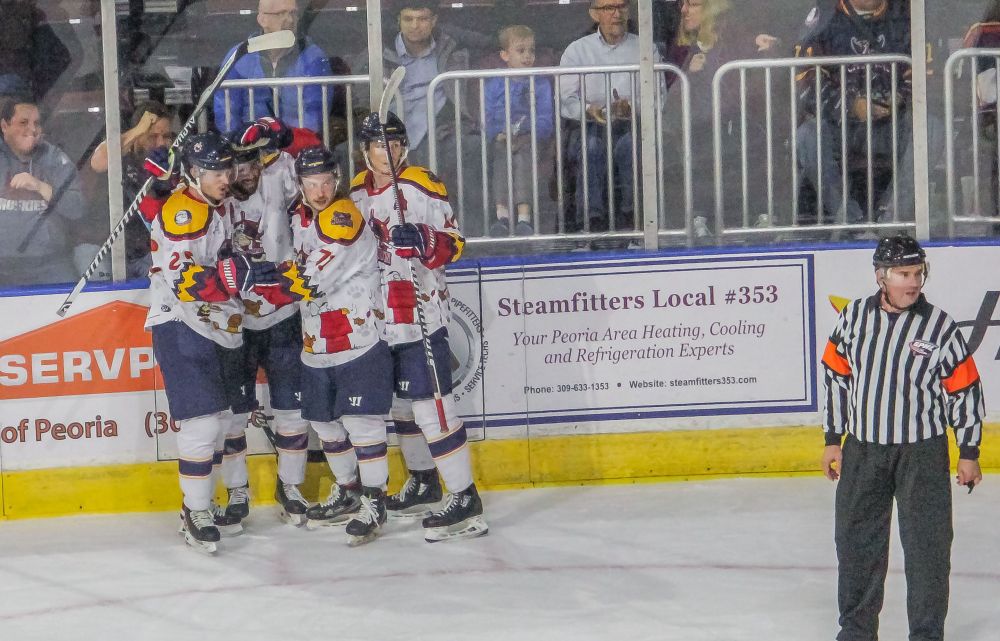 DANVILLE, IL –  The Peoria Rivermen continued their winning ways and benefited from eight different goal scorers to record their biggest win of the season, 8-1, on Saturday night against the Vermilion County Bobcats at David S. Palmer Arena.

One of the key points that Coach Jean-Guy Trudel has been talking about with his team has been first-period starts. Saturday night's first period was certainly one he could be happy with. The Rivermen struck first with Alec Baer receiving a pass from Kasey Kulczycki along the left-wing boards. Baer then skated into open ice in the slot and waited for the goaltender to go down. Once he did, Baer waited for the shooting lane to open up before firing the puck into a mostly open net to record his sixth goal in six games. The Rivermen didn’t stop there as Mitch McPherson deposited a rebound off of a Zach Wilkie point shot. This was followed up less than a minute later by Jordan Ernst who found the back of the net from a wrist shot in the high slot off the rush for his second goal in as many nights.

Up 3-0 going into the second period, the Rivermen poured on the pressure. Zach Wilkie was able to get on the scoreboard after a nifty backhand pass from Tyler Barrow from the side of the crease found Wilkie steaking in toward the back door. Barrow then followed it up a few minutes later by batting in a rebound produced after an acrobatic save to record his seventh of the season. Up 5-0, Peoria continued their offensive blitzkrieg as Nick Neville rifled home his first of the season off the rush. JM Piotrowski was able to finish off the period with a goal off a rebound with under a minute to play in the second. When all was said and done, Peoria led 7-0 going into the second intermission.

Despite the Bobcats getting on the board in the third period, the Rivermen answered back as Tyler Barrow chased in a dump and touched a pass out in front. Joseph Drapluck got his stick on the puck and deflected it short-side into the back for the net for the eighth goal of the night for Peoria.

The Rivermen cruised the rest of the way to their biggest win of the season 8-1 over Vermilion County to record their fifth win of the season on the road to improve to a league-best 6-2-0 record away from Carver Arena. The Rivermen will be back on home ice next weekend as they welcome the Huntsville Havoc to Peoria on December 9 and 10.