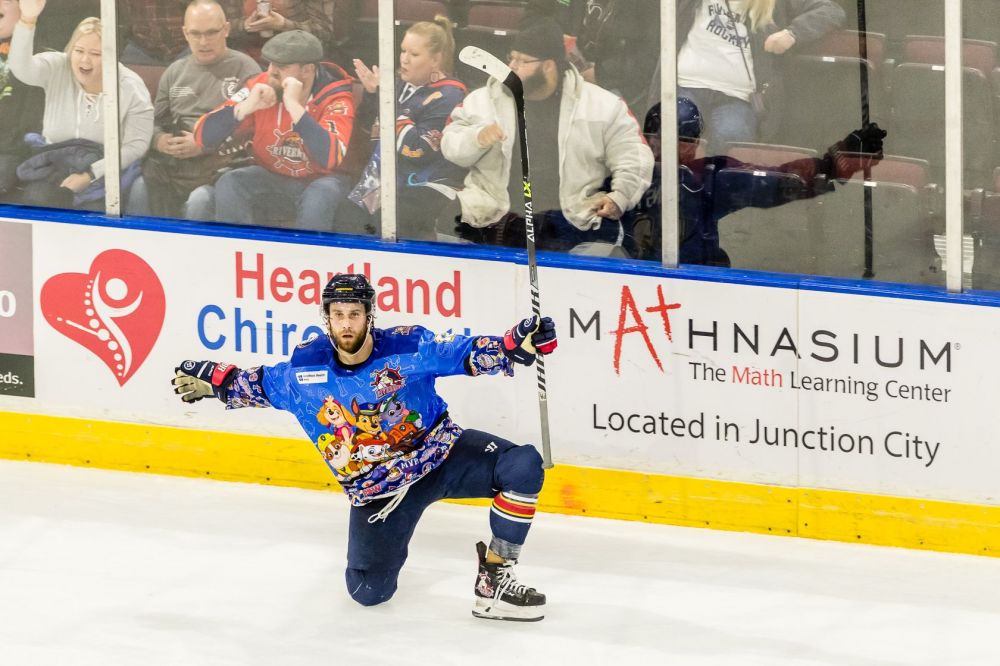 PEORIA, IL –  The Rivermen landed an exclamation point of a response to their 6-4 loss last night with a 5-2 victory on Saturday at Carver Arena.

It didn’t take long for the Rivermen’s newest acquisition, Alexandre Carrier, to make an impact. Midway through the period, he skated up ice on a two-on-one rush with Dale Deon on the right side. Carrier waited as long as he could before sending a perfectly timed pass across the slot to Deon on the back door who made no mistake in depositing his second goal of the season to put the Rivermen up 1-0.

Alec Hagaman got the second period off to a hot start after he picked up a deflected puck from the left-wing side and skated into the offensive zone. Hagaman then rifled a shot in past Knoxville netminder Alec Calvaruso to put the Rivermen up 2-0 just 11 seconds into the second period. Peoria added another goal off a feed to the net front that was deflected in by Joseph Drapluk for his 7th goal of the season. The Ice Bears answered back with a goal at the mid-point of the period to trim the lead to 3-1, but the Rivermen allowed nothing more in the second period.

Knoxville went on the attack in the third period, netting a goal that pulled them within one on an awkward shot. The Ice Bears thought they had an equalizer goal later in the period but the goal was waved off due to Knoxville’s captain throwing Ben Assad’s stick into the stands. The game came down to the last several minutes when Jordan Ernst found pay-dirt on a two-one-one with JM Piotrowski. Piotrowski showed good patience as he waited for Ernst to beat his man in the slot before sending a quick pass to him. Ernst pulled the puck to his backhand and roofed a shot into the top-shelf to put the game on ice, 4-2, for Peoria. But the Rivermen were not done yet. In the waning seconds, a net-mouth scramble ensued in front of the Knoxville net. Zach Wilkie got several looks at the net and was able to jab the puck into the net through a mass of bodies in front. Wilkie’s goal with just under ten seconds to play effectively put an exclamation mark on the contest for Peoria.

The win puts Peoria back in third place in the SPHL standings while marking their first win at home in 2023. The rubber match between the Rivermen and the Ice Bears will take place on Sunday afternoon at 3:15 pm at Carver Arena.