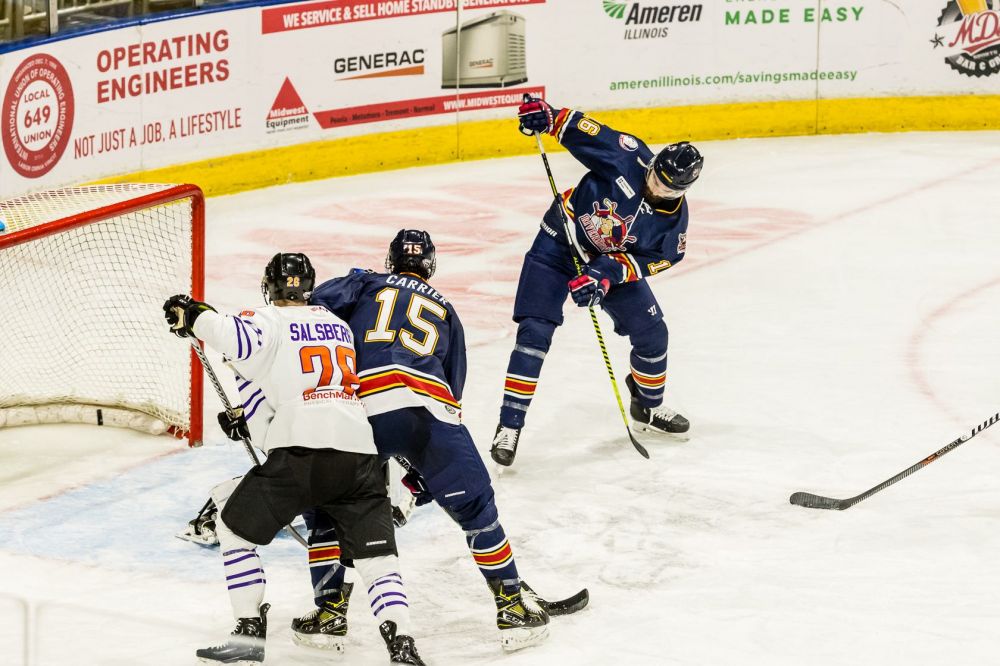 PEORIA, IL –  While it wasn’t the best start, the Rivermen rallied back on Sunday. Led by three goals by Jordan Ernst and an electric power play, the Rivermen rallied from a 2-0 deficit to defeat the Knoxville Ice Bears 6-2 at Carver Arena. Eric Levine earned his 86th career Rivermen victory to become second, all-time, in Peoria franchise wins.

Despite several good chances in the first period, the Rivermen found themselves down 1-0 late in the first off, a net mouth scramble in front of goaltender Eric Levine. The Ice Bears added another goal in the second period but Levine gave up nothing more. Soon, the Rivermen were on the attack.

While on a five-on-three power play, Jordan Ernst fired a hard wrist shot from the right side that produced a rebound off of the pad. Marcel Godbout was in a perfect position to fire home the rebound to put the Rivermen on the board. But Peoria wasn’t done yet. Still on the power play, Mitch McPherson found the back of the net while standing at the goal-mouth. After a Tyler Barrow shot was saved, the rebound careened to McPherson’s feet. With his back to the net, McPherson back-handed the puck between his feet and into the net to tie the game at 2-2. Eric Levine made a number of quality saves, including on a breakaway during the waning seconds of the period to keep the game tied going into the third.

It was in the third period that the Rivermen made their move offensively. Three straight goals by Jordan Ernst in the third period, with two coming on the power-play, put a stranglehold on the contest. The hat trick marked Ernst’s first since game two of the 2022 President’s Cup Finals. Alec Hagaman added an empty net goal to ice the 6-2 victory and sent teammate Ben Oskroba to a happy retirement.

On the whole, it was a banner day for Rivermen special teams, Peoria was perfect (4/4) on the penalty kill while converting on four power-play goals off of nine attempts. Peoria, with the win, is now in second place in the SPHL standings. They’ll head to the Quad Cities for two games next week with the rival Storm on Thursday and Friday.