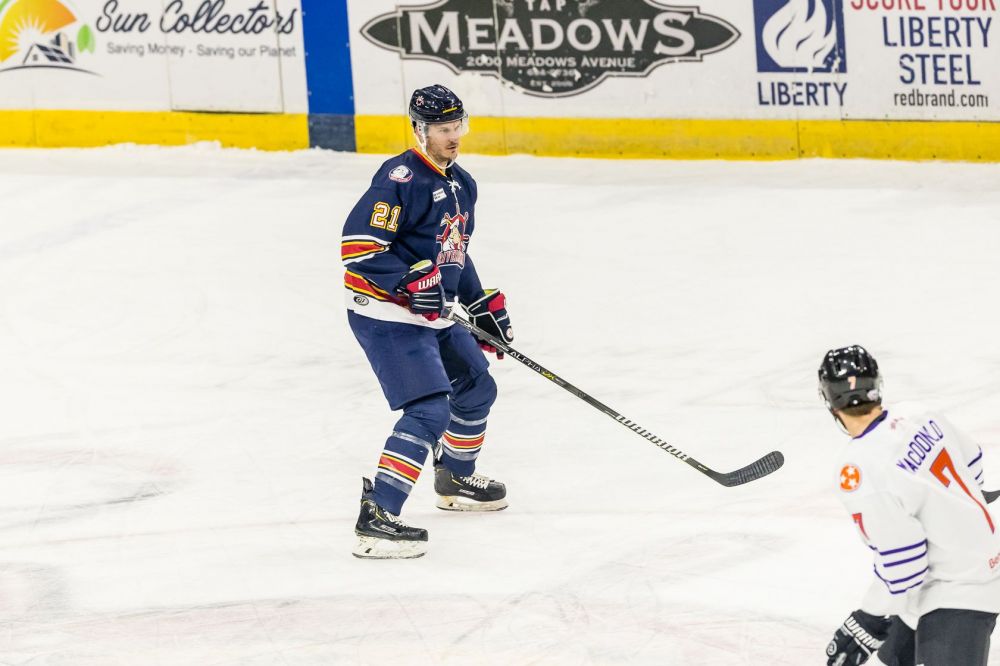 PEORIA, IL –  The Resilient Rivermen fought back to within one three separate times on Friday, but they could not find the equalizer as the Rivermen fell to the Knoxville Ice Bears 6-4 at Carver Arena.

The contest started off about as good as could’ve gotten for the Ice Bears who found the back of the net in their first two shots on net. This caused a quick goaltender change as Ben Churchfield was pulled in favor of Eric Levine. Knoxville netted another goal on the power play that marked Justin MacDonald’s second goal of the night and league-leading 17th of the season. Peoria fought back though and was able to get on the board in the later stages. A quick pass from Tyler Barrow in the left corner found Cayden Cahill all alone at the left-wing dot. Cahill, with time to pick his spot, rifled a shot off the right post and into the net to get the Rivermen on the board down 3-1.

Zach Wilkie was able to pull the Rivermen within one with a quick shot from the deep slot to record his fourth goal of the season. But the Ice Bears re-took the two-goal lead midway through the second period. Then came arguably the most dramatic ending to a second period in recent memory. In the waning seconds, a net mouth scramble developed in front of the Knoxville net. With less than a second before the horn sounded to end the period, Jordan Ernst buried a rebound to pull the Rivermen within one goal. After a lengthy review, the goal was upheld and the Rivermen took a 4-3 deficit into the locker room and into the third period.

But in the third period, the Ice Bears once again extended their lead by two before, once again, Peoria tied the game. Braydon Barker skated the puck up the right-wing side and behind the net with the puck. Electing to keep it himself, Barker wrapped the puck around the net and stuffed it into the back of the net to pull the Rivermen within one. Down 5-4, Peoria was pressing hard in the waning minutes, but they took a penalty in the late stages that sapped any momentum. The Ice Bears took advantage and cashed in an empty-net goal to seal a 6-4 victory, their first over the Rivermen this year.

Peoria will be back in action tomorrow night at Carver Arena, face-off is set for 7:15 pm.