Rivermen Charge Back Against Bobcats 5-2 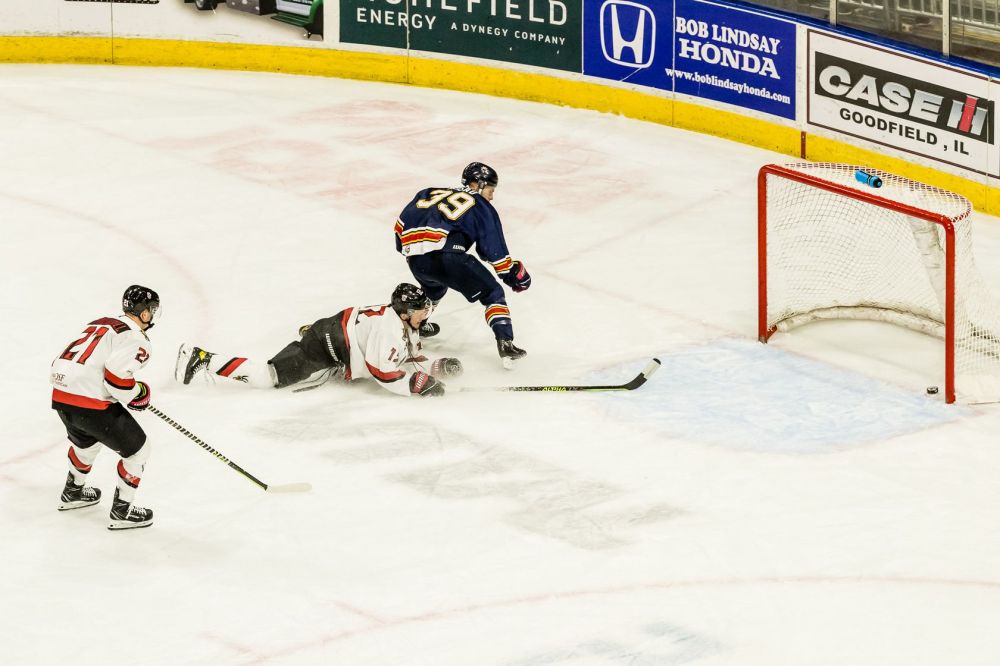 PEORIA, IL –  Peoria came back from a two-goal deficit on Sunday afternoon to record their fifth straight victory and take sole command of first place in the SPHL following a 5-2 victory over the Vermilion County Bobcats at Carver Arena.

The Bobcats came out with speed and intensity in the first several minutes of the first period. After several great chances were denied by Rivermen goaltender Eric Levine, the Cats were able to break through to take a 1-0 lead. Though the Rivermen had the better part of the shifts in the latter half of the period, they entered the first intermission scoreless.

Period number two did not start as well as the Rivermen would’ve liked as they fell down 2-0 in the early stages of the frame. But just 21 seconds later Peoria responded as Joseph Drapluk found Alex Carrier on a back-door pass during a net-mouth scramble. Carrier’s first of the season put the Rivermen on the board, trailing 2-1. Peoria then killed off seven consecutive minutes of penalty time and went on the attack. In fact, the Rivermen outshot the Bobcats 3-2 on that penalty kill. It set the table for two quick goals in just 16 seconds. The first came off an Austin Wisely deflection at the side of the net that directed the puck just up and over the pad of Vermilion County goaltender Brett Epp to tie the game 2-2. This was then followed up by Marcel Godbout’s turnaround shot from the high slot that caught Epp out of position and sailed into the net before the goaltender could react. When all was said and done, the Rivermen had turned a 2-0 deficit into a 3-2 lead by the close of the second period.

Peoria extended their lead in the third period as JM Piotrowski corralled the puck in the slot and rifled a shot off of the right post, the cross-bar, and into the net to put the Rivermen up 4-0 in the late stages of the game. Ben Assad added on an empty net goal thanks to a great hustle play where he chased down the puck past a Bobcat defenseman. Assad’s empty-net goal put an exclamation mark on the contest as the Rivermen defeated the Bobcats 5-2 for a clean three-game sweep on the week.

The Rivermen will spend their next seven games on the road, starting with a three-game road trip to Fayetteville to take on the Marksmen starting on Friday, January 27.