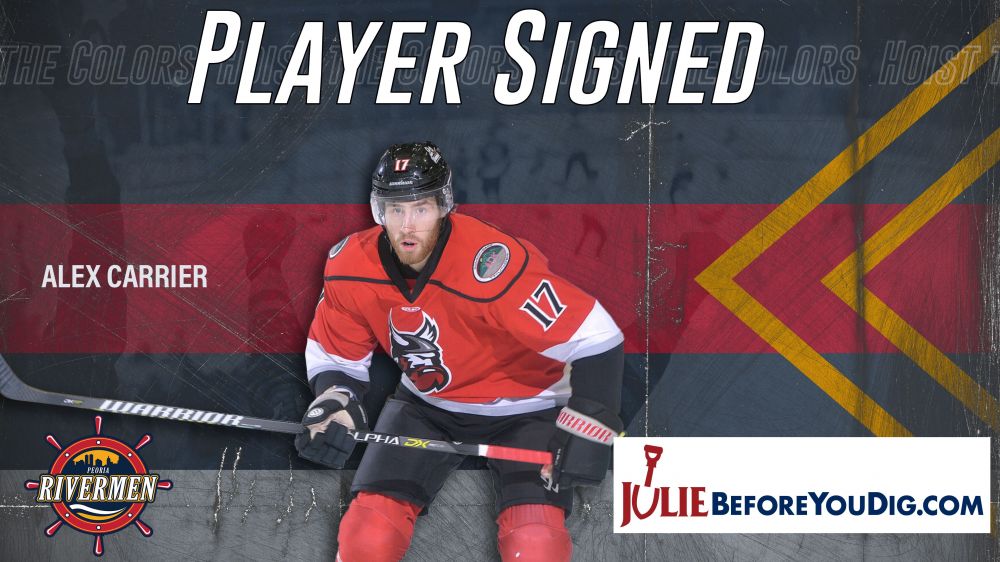 PEORIA, IL –  In a flurry of roster moves on Saturday morning the Rivermen have signed forward Alex Carrier as defenseman Cale List has been called up to the ECHL’s Indy Fuel.

Carrier played with the Rivermen during the 2014-15 season. In that year, he played in 11 games and netted two goals and two assists for four points, and accumulated 51 penalty minutes. Most impressive of all is the vast experience in professional hockey the native of St-Elzéar, Quebec boasts. At 32 years old, Carrier has nine years of professional hockey at both the ECHL and the AHL ranks. This will be his first professional action of 2022-23 and will mark his 10th professional season. Carrier will be available for the Rivermen this evening as they take on the Knoxville Ice Bears.

In addition, defenseman Cale List has earned his first call-up to the ECHL and will sign with the Indy Fuel, AA affiliate of the Chicago Blackhawks. List played in four games for the Rivermen and boasted six shots on net and was an even plus-minus.

The Rivermen are in action tonight against the Knoxville Ice Bears for Nickelodeon Paw Patrol Night with the Rivermen presented by Mathnasium. Peoria will wear specialty Paw Patrol-inspired uniforms that will be auctioned off after the game. In addition, the first 750 kids 12 and under through the doors will receive a free Rivermen puck. Face-off is set for 7:15 pm, tickets can be purchased by calling the Rivermen office a 309-676-1040.