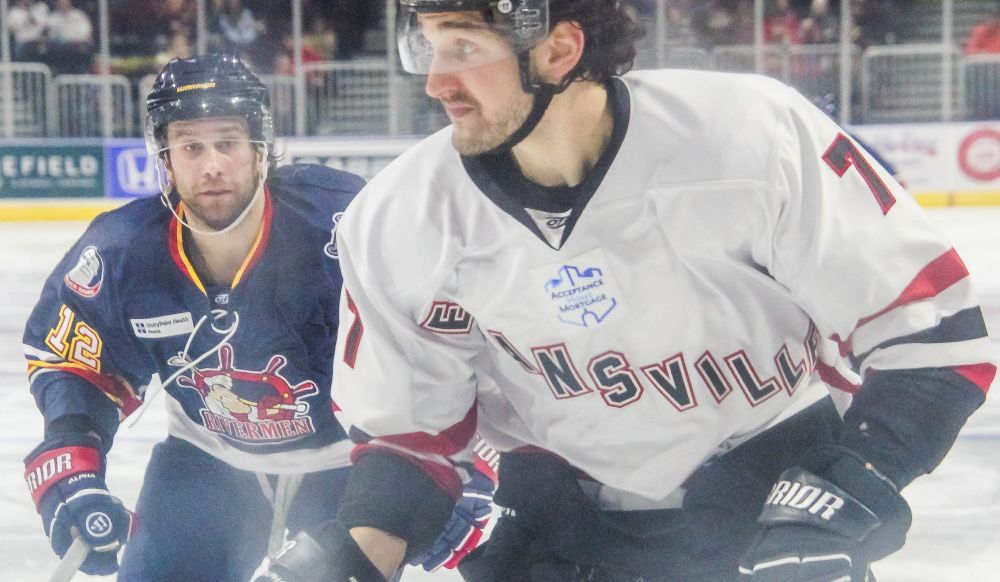 It was a bit of déjà vu for the Rivermen from their last visit to the Ford Center as the Thunderbolts were able to jump ahead by two quick goals thanks to some early power-play chances. Though Peoria did not register a shot on net until the mid-way point of the period, the Rivermen put together some quality shifts and had good scoring opportunities in the closing stages. However, they entered the first intermission trailing 2-0 for the second night in a row.

Despite Peoria dominating the pace of play in the second period, and out-shooting the Thunderbolts 17-7 in the middle frame, Evansville added on two more goals on defensive miscues to extend their lead 4-0. The Rivermen, despite a plethora of chances, were held off the scoreboard for the third straight period dating back to Friday night.

Though Evansville extended their lead to 5-0 in the third period, the Rivermen did not quit. They were able to net two quick goals from Alec Baer, off of a nice feed from Hagaman on the base of the left circle, and a power-play tally by Alec Hagaman. The Thunderbolts netted an empty-net goal to go up 6-2 before the final horn.

The loss marks the third straight for the Rivermen, their first such losing streak this season. The last time Peoria lost three games in a row was back on March 17, 18, and 19 in 2022 when the Rivermen dropped three straight road contests to Knoxville and Huntsville. Those losses helped lay the seeds of what would eventually be a championship-winning team. It stands to reason that this year’s Rivermen can draw on such a similar experience to help overcome their current challenge.