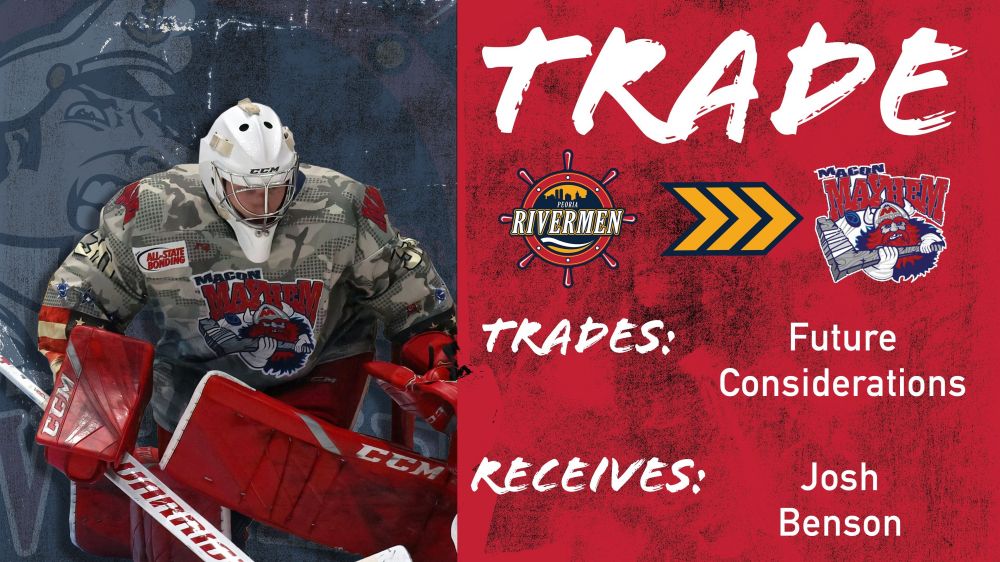 PEORIA, IL –  The Peoria Rivermen announced on Wednesday a flurry of roster moves ahead of their upcoming matchups with the Quad City Storm this Thursday and Friday. The Rivermen have completed a trade with the Macon Mayhem that brings goaltender Josh Benson to the River City in exchange for future considerations. In addition, the Rivermen have released goaltender Ben Churchfield.

Benson comes to the Rivermen from the Macon Mayhem after playing in 13 games this season. Benson boasts a 1-8-2 record with 4.36 goals-against average and an.875 save percentage. A 6’1, 190-pound native of Stillwater, Minnesota, Benson played Division I college hockey at Sacred Heart University from 2018-2022. In four years, Benson boasted 2.66 goals against average and a .900 save percentage with a 41-27-8 record. Benson played junior hockey in the North American Hockey League with the Fairbanks Ice Dogs.

Ben Churchfield leaves Peoria following eleven games played and seven wins on his record, Churchfield brightest moment came during a road trip against Knoxville and Huntsville in which he won all three games on November 17, 18, and 19. An achievement for which he was named Warrior Hockey/ SPHL Player of the Week.

The Rivermen are on the road this week in the Quad Cities on Thursday Morning (10:30 am) and on Friday night (7:10 pm) against the Quad City Storm. Peoria will be back at Carver Arena on Sunday, January 22 (3:15 pm) for an afternoon contest with the Vermilion County Bobcats.