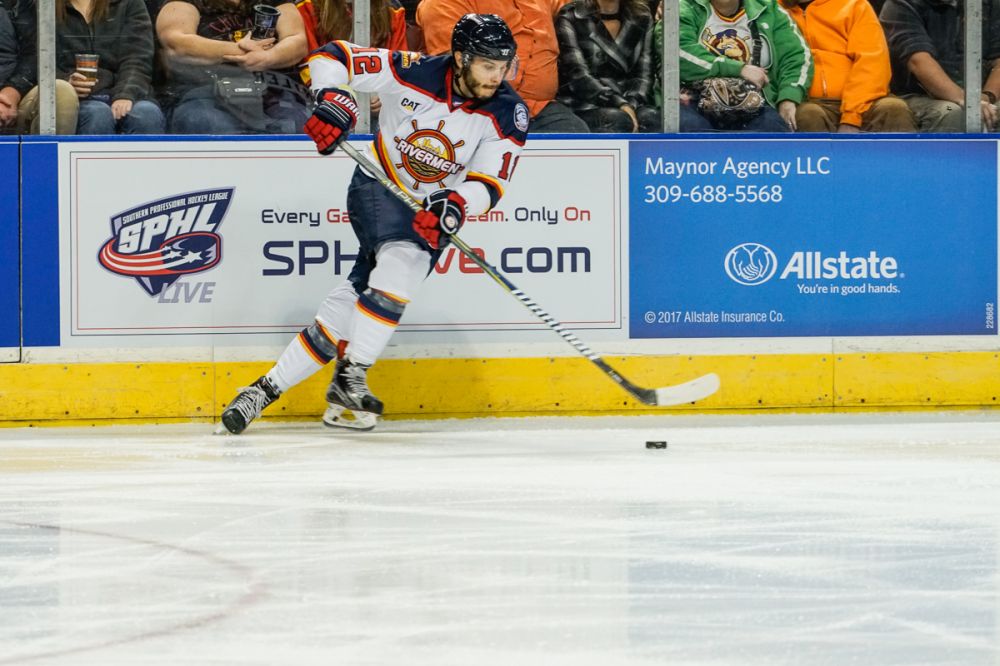 Peoria, IL – The Peoria Rivermen announced Tuesday that the team has signed veteran winger Mike Gurtler to a professional tryout agreement for this October’s training camp. Gurtler, who was among Peoria’s 13 protected players this offseason, returns to the Rivermen for his third full season in Peoria and his seventh overall season as a professional.

Gurtler, 31, ended a one-year retirement last season to set a career-high with 21 goals while skating in 55 games, all for Peoria. The 6-foot-2, 200-pound native of Rochester, NY added 17 assists to give him his highest single-season point total since 2013-14.

“Having Gurts back this year is going to be a huge piece to our puzzle on the offensive side of things,” said Rivermen head coach Jean-Guy Trudel. “He does everything we ask him to and more, he’s crafty and has a scorer’s touch around the opponent’s net, he’s one of our top penalty killers and blocks shots all over the place, and he’s a great veteran presence to have in the locker room.”

In his professional career, Gurtler has seen action in 267 regular-season contests, including 241 in the SPHL with Fayetteville, Huntsville, and Peoria, posting 80 goals and 95 assists. In 29 SPHL President’s Cup postseason games the veteran has added 11 goals and 12 helpers, including a team-best seven points in last season’s seven-game playoff stint.

“I’m thrilled to have the opportunity to come back and spend another season in Peoria,” said Gurtler. “Getting so close to a President’s Cup last season and (in 2016) has left me with a fire burning inside. I can’t wait for October so we can get back on the ice as a team and get to work on finally bringing this city the championship it deserves in 2019.”

Gurtler becomes the eighth member of the 2018 Rivermen training camp roster, and the first from Peoria’s offseason protected list to sign a formal tryout agreement. The Rivermen are expected to open training camp in early October ahead of their Oct. 13 preseason meeting with the Quad City Storm at Carver Arena and Oct. 20’s season opener at Quad City.