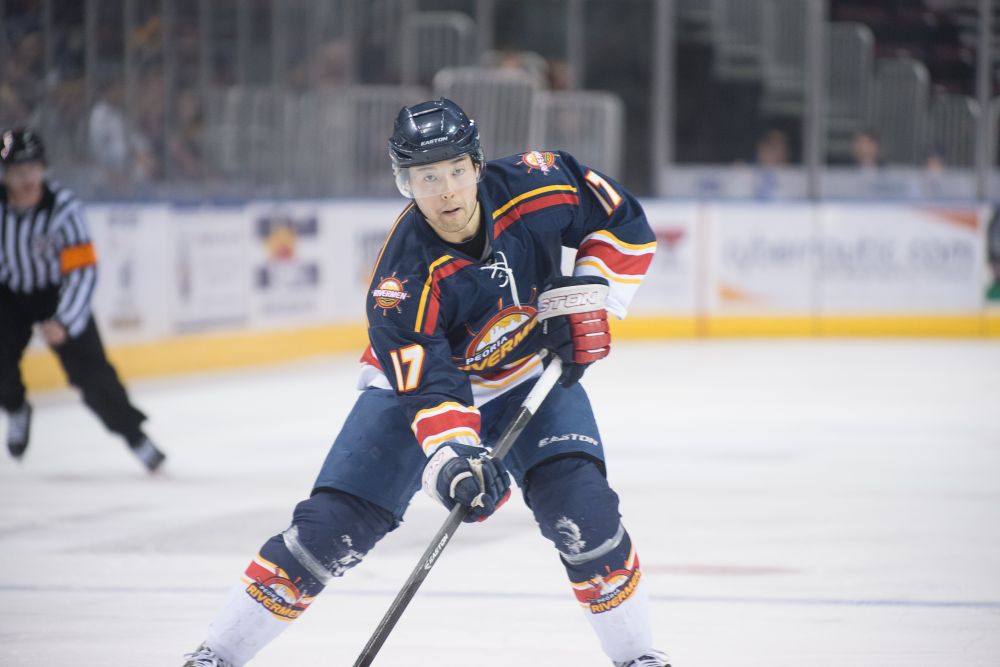 Peoria, IL – The Peoria Rivermen announced today that the team has signed veteran center Dean Yakura, rookie forward Chris Magi, and first-year goaltender Braeden Ostepchuk and second-year netminder Aaron Taylor to professional tryout agreements for the team’s October training camp. Yakura will return to Peoria for the first time since skating in one game for the Rivermen during the 2014-15 season, while Ostepchuk, Taylor, and Magi made their professional debuts last season for ECHL Greenville, FHL Danville, and FHL North Shore, respectively.

Yakura returns to Peoria after spending all of last season with the Knoxville Ice Bears, posting seven goals and 15 assists in 46 outings. Prior to last season, Yakura spent two years as serving as team captain for the Federal Hockey League’s Danbury Titans, compiling 35 goals and 89 assists in 95 regular-season FHL contests from 2015-17.

“We were glad to get Dean back on board for this year,” said Rivermen head coach Jean-Guy Trudel. He’s a positionally sound centerman who can win faceoffs, block shots, and plays a 200-foot game.”

Ostepchuk joins the Rivermen after turning pro late last season following the conclusion of a four-year career at Norwich University, where he was a teammate of 2017-18 Rivermen defenseman Cody Smith. The 6-foot, 195-pounder made his pro debut for ECHL Greenville, taking a loss in his only outing March 17 at Norfolk. The Lethbridge, AB native earned his first pro win in his SPHL debut March 30, earning a 7-6 win over Birmingham as a member of the Pensacola Ice Flyers. IN his four seasons at Norwich, Ostepchuk went 51-12-3 with a 1.79 goals-against average and a .924 career save percentage.

Taylor joins Peoria’s training camp squad after making his pro debut last season for the FHL’s Danville Dashers, going 9-12-0 between the pipes while finished second in the league with a 3.13 GAA and .914 saves rate in 26 outings. Before turning pro, the 6-foot-1 180-pound Gormley, ON native was 58-48 with a 3.05 GAA and 4 shutouts over parts of three OJHL seasons for the Souffville Spirit.

Magi comes to Peoria after making his pro debut late last season, posting a hat trick in his only pro game February 18 for the FHL’s North Shore Knights. The 23-year-old native of Montreal also saw action in 12 games for the QJHL’s Montreal East Rangers during the 2015-16 season, tallying a goal and four assists.

The additions of Yakura, Ostepchuk, Taylor, and Magi bring Peoria’s training camp ledger to seven players, including three forwards, two defensemen, and two goaltenders. The Rivermen are expected to open their training camp in early October prior to October 13’s preseason contest against the Quad City Storm at Carver Arena. Peoria’s regular-season schedule is set to begin October 20 at Quad City, and the Rivermen home opener is slated for November 2 against the Storm.